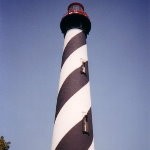 What's the tale? The lighthouse on the island is home to the spirit of a young woman, a man who was hung on the island, and a few pirates. It is known that 13 executed pirates have their final resting place behind the lighthouse.

Thoughts: There isn't enough evidence outside of the online haunted sites that warrants a "Confirmed" rating, if more evidence from outside sources is collected to support the assertion it is haunted the rating will be changed.