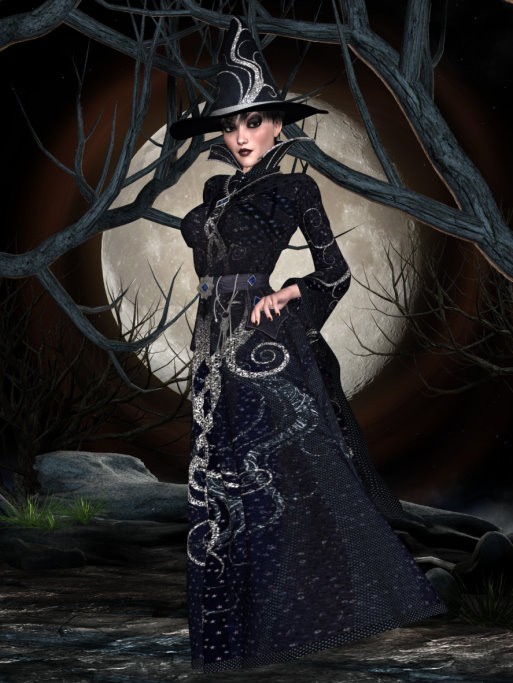 There is little doubt the word "witch" suggests a woman. It wasn't always that way, but it has certainly cemented itself in that manner over the last hundred years. While the term has come to mean someone of more malicious intent and gained a negative, attached stigma since Medieval times and the surge of Christianity, it's important to remember that like any group "witches" could be good or bad. The term "witch" originally, simply meant someone who possessed the power to will others. In some cases the man or woman didn't even know they possessed this gift and it took an already established witch to "see" the gift in them.

Beyond the term witch someone was classified as good or bad; "white" or "black" witch respectively. White witches were those who provided wisdom to others. They were revered and respected. They were looked upon as honored guests, and people of all classes sought their guidance. Originally this term encompassed many of the more classified gifts we see today like diviners, healers, empaths, mediums, etc.

Most originally described by the term "witch" were neutral; capable of good or bad. They acted as they deemed fit by the person, situation, or their mood. They were typically viewed with the same, neutral attitude by their community. While some feared them, some respected them, and most did not think twice about it.

By today's standards it seems rather silly to be so influenced by a witch, but you have to put yourself in the times when these goings on were relevant. The human race longed and searched for reasoning in lives where no reason seemed to apply. What we can now explain through science, medicine, and human anatomy, they could not explain because they were not privy to such information. When someone is recognized for having a life more influential than someone else's (beyond their own comprehension) they become an easy target for blame. Further still, sadly, in some cases people who simply were (by today's standards) holistic geniuses who had no interest in magick who were deemed "witch" for their more developed mind & ease of understanding the application of herbs, minerals, etc.

The term "maleficium" is something often used in describing witchcraft and was the word that inspired "Maleficent" (now a box office movie). It encompassed the evil-doers, the darker side of the witches, those who were sought out to do the despicable things no moral witch would do. Of course "moral" describing whatever societal morals existed for that community. The black witches were truly those who were maniacal and in complete disregard of the free will of others.

Upon the surge of Christianity and the occupation of Christian governments in foreign nations, the term "witch" was a blanket term for anyone who practiced any sort of witchcraft (good or bad) and even extended to other forms like Shamanism. Basically any spiritual practice that was outside of the scope of Christianity.

One of the oldest cases on record is that of the Witch of Kilkenny, Alice Kyteler. It is the quintessential witch trial. It has all the makings of a perfect drama; love, affairs, poisoning, witchcraft, and even an Incubus! In 1324 she became the spotlight figure in Ireland for having supposedly practiced witchcraft against her 4 husbands and their families.

Alice Kyteler was a women well-integrated in her community. She was married to William Outlaw, Adam le Blund, Richard de Valle and Sir John le Poer (in that order). It is surmised that during her marriage to William she had carried an affair with Adam. When she married Adam there were outstanding accusation Alice & Adam had disposed of William to make way for their marriage; nothing came of the accusations. In her last marriage, John became ill and began to express to family and those close to him he felt his was being poisoned by Alice. After his passing John's family not only revived various accusations against Alice, they enlisted the children of William, Adam, and Richard to join in their roasting of Alice.

From accusations of murder by poisoning the accusations built to those of witchcraft, sacrifices, and bedding an Incubus. It came at a particularly bad time because the Pope (John XXII) had added witchcraft to the church's official list of heresies. Alice, through connections of her adult in-laws managed to escape arrest at first, and even had the Bishop who brought charges against her arrested instead. Though her wall of nepotism crumbled when Alice's servant Petronella was captured, tortured, and made a slew of confessions against Alice. At which time Alice fled Ireland with Petronella's daughter, never to be found in historic record again.

Unfortunately, since the star defendant had fled the jurisdiction the blame and punishment had to fall on someone. The cries for justice from the families of the four men Alice had married caused Petronella to be flogged and burned on the third of November in 1324.

While it's readily unclear if Alice had actually practiced magick, or if it was simply the best accusation that could be made to ensure death (in light of the Catholic Church's recent decree), what is certain is that for all the people in the world of witchcraft, this trial marked the sinister turn of witchcraft being viewed as anything but pure evil. Rather than being a respected field, and the people who trained, studied, and practiced, being regarded with respect, it became an accusation that could be hurled as simply as opening your mouth, but unlike the proverbial sticks or stones, those words would actually kill you.

It became the systematic breakdown of witchcraft from a field of recognized study to a dirty, evil practice which would lead you to be beaten, flogged, tortured, stoned, stretched, burned, or drowned. At least you might get away with a disfigurement or exile, but more likely you'd be killed.

You don't like your neighbor? Call them a witch. You want to get rid of your spouse? Call them a witch. You don't like your mother-in-law? Call her a witch. It was ridiculously easy to not only make the accusation, but have the sheeple believe you. And god help you if you were the crotchety old woman in the community, or the weird, old woman who lived in the forest because you hated people because it wouldn't take much to have an entire village turn against you. As far as the forest dwellers (reminder here that in those days no one bathed, brushed their teeth, and fecal matter was typically not far from their homes) I'm actually surprised there weren't more people living in the woods away from the populous.