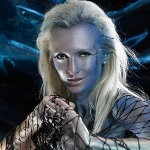 Location: Antarctica
Race: Arctic Elf
Sex: Both
Restrictions: Accepted members at time of birth, or by referral of existing member
Identifiers: They were skilled in fishing, and developed their own tools & inventions for deep-sea, frozen fishing. They were a close-knit group who shared everything, and they lived in large dwellings with up to 50 of them in one home. They had a communal family unit, they did not marry, and had children with various others in their community. They were known to be elite for the great power in Khaliri magick, an ancient form of magick that utilized the Astral Realm to perform various feats. To be accepted in their Alliance you had to be an Arctic Elf, pure-blood, and you had to have some special skill to bring to the community.