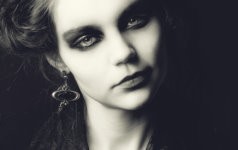 Location: Europe
Classification: Sanguine, Psy
Time Period: AD 9th-17th
Restrictions: Accepted members by referral of existing member
Identifiers: They were scholars, and historians, who preserved not only Vampiric history, but the history of all species that thrived around them. They were a multi-religious Clan, which did not bar admittance based on belief system, and rather embraced it. They were also scholars of magick, learning from the religious, and non-religious, histories surrounding magick in Italy.
Predatory Behavior: Median