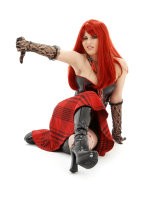 Location: Ireland
Classification: Sanguine, Psy
Time Period: 1st BC-AD 11th
Restrictions: Accepted members by referral of existing member
Identifiers: They were rough & tumble, loved to get into fights, were outspoken, wild, unpredictable, crazy, and absolutely incapable of being tamed. They were not overly dangerous, but they were spontaneous, and their passion for being in a tousle, could get innocent bystanders into an insane fight, or unusual predicament. They were quick & efficient hunters, and would often have contests to see who the hunters for the group would be for every outgoing. They liked feats of strength, and because of their overly physical devotions, their Clan was largely male.
Predatory Behavior: Median