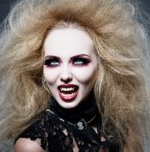 Location: Australia
Classification: Sanguine Vampire, Psy Vampire
Time Period: AD 6th-16th
Restrictions: Accepted members by referral of existing member
Identifiers: They were naturalists, they lived in the nude during the day, dressing only at night, they hunted & fished, they believed in spiritual acts of power & energy, they believed in Lunar power, and acted on the Lunar cycles. They were passive, for the most part, but if threatened could be swift, deadly, and merciless.
Predatory Behavior: Median