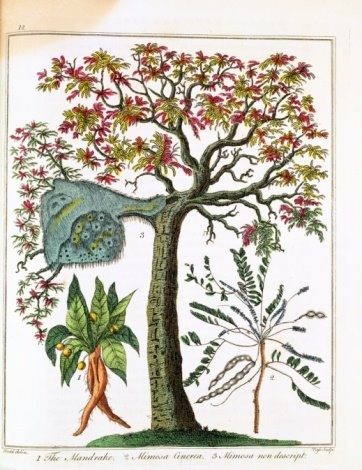 Baaras is a mysterious plant believed to grow on the road to Damascus (has been identified in other places in the Middle East also).  In modern times it is believed to be some variation of Mandrake though this cannot be proven.  It is a mystical plant which is surrounded by myths of power and some rather bizarre superstitions.

As a tool of power the Baaras is part of recipes in Alchemy and is a necessary ingredient in turning metals. It is said to be invisible during the day and must be located by the light of a torch.

It is also said to be able to repel demons from those possessed.  If you place the plant on the possessed person the demons will flee from their body and from their home.  However, if you plan to utilize this plant for that purpose it must not be pulled by hand as it will cause immediate death.  It must have the menstral blood or urine of a woman poured upon it, or you must dig around the plant until you see the end of its root, tie a dog to the strongest place on the plant, and call the dog to you to have the dog pull it from the ground.  However, the dog will die and you must be willing to sacrifice the dog in order to obtain the plant.