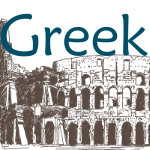 Greek's creation myth varies from time period, locality, and person telling the story. The core of the story remains the same in all tellings.

Chaos was the void of the Universe which was surrounded, as a moat, by water ruled by Oceanus. Eurynome ("far-ruling") was the goddess who controlled Chaos & Oceanus. She was the goddess of all, and wanted to tame Chaos. Through mating with Ophion (a snake), or the North Wind (by other accounts), she gave birth to Eros (god of love). In some accounts Eros is referred to as Protagonus. In alternate version of the story it is Nyx who gives birth to a golden egg that hatches and produces Eros. Love was the beginning through which Chaos & Oceanus were tamed to create the world.

With her new son, the god of love, as a catalyst to developing this new world, Eurynome danced on the waves of the water of Oceanus, and separated the sky . In an alternate form of this myth Nyx's egg shell splits and the sky and waters are separated. The sky became known as Uranus, and the Earth that rose from the parted waters, Gaia. Eros enchanted Gaia & Uranus to fall in love with each other, never to be separated. And, into the depths of the Earth beneath Gaia's reach lay Tartarus, the core of the planet which never received sunlight.

From the union of Gaia & Uranus came the Titans. The Titans were giants who had less than controllable behavior. They were slave to impulse, outbursts, selfishness, and rage. They were forces of nature that seemed to be more Chaos than Earth or Sky. Uranus & Gaia gave birth to twelve children; six sons, and six daughters. They were: Cronus and Rhea, Iapetus and Themis, Oceanus and Tethys, Hyperion and Theia, Crius and Mnemosyne, and Coeus and Phoebe. They each married a brother/sister.

Cronus married his sister Rhea, and they had six children (three daughters & three sons); Demeter, Hestia, Hera, Hades, Poseidon and Zeus. Cronus's father, Uranus, hid Cronus's children in Tartarus because he feared their ability, strength, and their growing powers. Gaia, meanwhile, grew weary of mating with Uranus, and resented the toll she bore in supporting them all on the Earth. She begged her children to help her end her uniting with Uranus, but Cronus was the only one who agreed to help her, so Gaia gave Cronus a sickle. When Uranus came to mate with Gaia, Cronus sliced Uranus's genitals from his body, and from the blood that trickled to the Earth from his wound, the Furies, Giants, and Meliae were born. In alternate versions, Cronus threw Uranus's genitals into the waters of Oceanus, and from the foam that bubbled, Aphrodite was born.

From Cronus's victory, he claimed his father's throne, and Cronus & Rhea became the leaders of the Titans. Through their leadership the Titans went through a Golden Age. During this time, it was peaceful, and everyone lived together in a harmonious, happy environment. There were no need for laws because everyone obeyed the golden rule. However, within this Golden Age, a destiny was revealed that led to Cronus being overthrown by his children. Fearing he would lose the throne, and his power, Cronus ate his children, swallowing them hold, and keeping them deep inside his body where they could not rebel.

Rhea, however, did not share Cronus's views. She did not want to be without her children, so she sought her mother, Gaia's, help. She saved Zeus by replacing Zeus with a stone of equal weight, in his swaddling clothes, and when Cronus grabbed the bundle, he did not realize the baby was not inside, and swallowed it. Zeus was taken to Crete, and Gaia & Rhea were able to keep him there in a cave on Mount Dicte. Zeus was raised by a divine goat named Amaltheia who provided him her milk. When Zeus grew into a man Gaia urged him to return to his father, and beg him to return his brothers and sisters. In an alternate version of this story, Zeus was given an emetic potion which forced Cronus to throw up the children. Zeus, along with his mother, and brothers & sisters, revolted against their father, which, in turn Cronus's brothers & sisters (the other Titans) fought alongside Cronus, which eventually led to the defeat of the Titans after 10 years of war, and they were all banished to Tartarus.

In his victory, as the lone savior of his immediate family, Zeus came to be the leader, over his mother, and brothers & sisters. He divided the Universe amongst them, and sought to restore his own form of order, and his own Golden Age. He declared himself the overlord of all, and created Mount Olympus as a symbol of his glorious victory, and to have a place he thought was fitting for gods & goddess of the Universe.

Zeus had created the world he wanted, but it was not the world everyone wanted. The creatures that had been created by his mother, and the Titans were not to Zeus's satisfaction. He did not like anything that was not to his standards, and he looked down on those who did not share the gods immortality. He ignored the requests from the creatures of the Earth, and they were living in deplorable conditions of starvation, lack of shelter, warmth, and basic survival needs. This, unfailing, and merciless attitude, was ironically, Zeus's Achilles heel. There was one person who heard their pleas for mercy, Prometheus.

Prometheus, the only Titan not conquered by Zeus's triumph over the Titans. Prometheus heard the pleas for help, and decided to do something about it. Prometheus took clay from the Earth, and aspects from all the living creatures created by his family, the Titans, and created humans. They were his pet project, and to ensure his creations would not live under the tyrannical oppression of Zeus's freezing nights, and lack of food, Prometheus stole fire from Olympus, and gave it to the creatures & humans on Earth.

Through this small gesture, the creatures flourished. They had the ability to warm themselves, and cook meat, relieving them from solely depending on foliage for nutrition. Their survival rate increased, and the creatures grew in size due to no longer being malnourished. When Zeus saw what was happening he lashed out, quickly & swiftly. He took Promtheus's action as a threat to his power, and he did not want the creatures & this new created "man" to be able to overthrow him, as he had done the Titans. He chained Prometheus to a boulder, and had vulture come eat his liver, every day. His liver would regrow, so the punishment was endless. Until, at a much later point in time, Heracles killed the vulture. Do further cause stress and anger to Prometheus, Zeus asked Hephaestus (the god of fire & blacksmith, who had taken the place of the Titan Iapetus), to create something to taunt & torture Prometheus, and Hephaestus created Pandora. She was the first woman on Earth who had been created using water & Earth. She was given gifts from various gods & goddesses, including beauty, talent with music, persuasion, and her name meant "all-gifted". She was presented to Prometheus's brother, Epimetheus, as a gift, which was an insult to Prometheus. She was given a box (in some accounts, a jar), as a "wedding" gift, and was told to never open it. Though, curiosity overcame her, and she opened the box, releasing terrible & evil forces across the world, except for hope, which remained in the box.

Meanwhile, Prometheus kept the prophecy of one of Zeus's own children overthrowing his power in Mount Olympus, as his own secret, in revenge for what Zeus had done. He kept that secret, which led to Zeus's downfall, and history repeated itself as son overthrew father.

From this point forward, the myths, legends, and stories of the Greek gods, goddesses, and demi-gods spirals into countless tales of creation, power, curiosity, death, and adventure.