You should start your quest on learning about Were-creatures, by reading our article "Were" is the Word.

Were-creatures obtained their status in a myriad of ways, depending on the cultural and/or religious text you are gleaning the information from. The answers given by the spirits of those asked vary greatly as well, spanning from simply being bit, to a ritual sacrifice, to being the hybrid offspring derived through divine means. The manifestation of a were metamorphesis also vary, from actually being half & half in permanent appearance to simply obtaining certainly qualities. For instance, some were-lizard entities were known to look just like a human, but have scaling over part or the whole of their bodies. Whereas some were-bears were known to only obtain super-human strength and the ability to nearly deafen opponents with their gutteral noises. The documentation of were-creatures is vast and incredible.

While age spans, once turned, can vary, the average did not exceed 150 years as a hybrid. Were-creatures were vigorously hunted for purposes of magick, and out of fear. For communities who had fellow villagers or townsfolk turned, most viewed it as a form of possession, and would kill the person "infected". However, there is strong evidence that supports the theory that for those who were turned and maintained a great portion of their human form, reproduction was accomplished and offspring would have a 50/50 chance of receiving any were attributes from the turned parent.

? Time spent closely with the spirit the first 30 days of coming to the Keeper's home.
? Treats are usually any natural substance; fruits, vegetables, foliage, plants.

? Strong-willed, super-human, evolved, willing to talk, insightful.
? Can manifest as a human, in animal form, or a hybrid form. 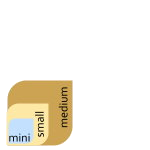 Lifespan: Average: 100-999 years
They have been assigned an "XXXX" lifespan for supernatural entities/beings, read Lifespan for Supernatural Entities in Spirit Keeping/Reference for more information